Get fresh music recommendations delivered to your inbox every Friday.

Christmas Till The End (Powdered Hearts 2021) 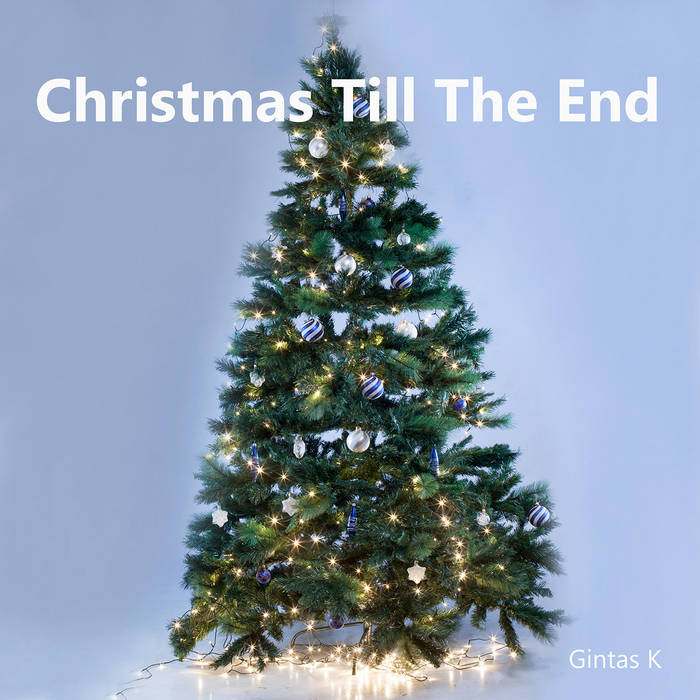 Gintas K – Christmas Till The End
auralaggravation.com/2021/12/31/gintas-k-christmas-till-the-end/
Posted: 31 December 2021
Christopher Nosnibor
I vowed not to cover anything Christmas-related, simply because, well, because, and also because fuck it. Christmas releases tend to be mawkish, and / or shitty cash-ins, which I have simply no time for, and even a general distain. Charity fundraisers are laudable, although in a just world there should be no need for them because ultimately the state should be supporting the needy and vulnerable without musicians, most of who make next to nothing from their art, having to donate their small royalty fees to food banks and the like. Christmas sucks on so many levels that it’s an essay or even a book in its own right, but this perhaps isn’t the place to begin expounding any of that.
But here we are, and here I am making an exception, and for what I feel to be the right reasons, with the additional bonus that this is no crappy cash-in, and no motive beyond itself.
The prodigiously prolific Gintas K celebrated Christmas unconventionally with yet another release, this time in the form of a Christmas treat entitled Christmas Till The End. With five tracks in all, which are mostly shorter pieces, apart from the twelve-minute title track, it’s quite a departure from much of his back-catalogue, not least of all some of his experimental digital explosions of recent years which have seen him move from microtonal explorations to squelch-laden sonic chaos delivered by means of some nifty software run though an ancient Lenovo Thinkpad (something I have infinite respect for: so many musos have state of the art hardware, while I’ve discovered for myself that reconditioned corporate laptops even from a decade ago have better specs and are built more sturdily than the majority of consumer-orientated laptops). Whatever the sonic differences, though, he’s maintained the same process, namely recording each track live in a single take with no overdubs.
Christmas Till The End may not be the frenzied digitised froth of recent releases, whereby GK simply blasts out various strains of laptop-generated whirring, blooping, crackling noise, and you couldn’t exactly call it a conventional Christmas album, or a celebration of the festive season, either. It’s more of an assemblage of elements of Christmas collaged, crossed out, crunched together.
If the first track, ‘Bah’, perhaps speaks for itself, ‘Für Elise’ presents a picture that highlights the complexities of Gintas’ work. It features Beethoven’s ‘Bagatelle No. 25 in A Minor’ (aka ‘Für Elise’) and mangles the absolute fuck out of it, because it’s a Gintas K digital mess mash-up. There’s no overt or explicit statement here but trashing the piece feels more like a desecration of the Christmas spirit than a celebration, an act of destruction that feels wonderfully irreverent and more than just a little cathartic in context. It is, also, an ultimately avant-garde act of destruction, in keeping with the principle of destroying the old to build anew. Here, Gintas renders that destruction performative, integral to the form and content.
‘Hymn Lithuania’, at first, does sound overtly Christmassy: a rendition of the Lithuanian national anthem on a glockenspiel, the notes ring out, chiming, bell-like and charming. But after about a minute, it begins to degrade and disintegrate as extraneous noise, feedback and bleeping whistles begin to disrupt the tranquillity, while the delicate piano of ‘vivaLIDL spring’ is ruptured by bomb-like detonations and the clatter and thud of descending rubble. If I’m not mistaken (and I may well be), a corruption of Vivaldi’s ‘Spring’ played at about a quarter pace provides the backdrop to this grim scene; you can almost picture the pianist playing, the film in slow motion, while the building collapses in flame around him. The wordplay is also worth noting – I’m assuming LIDL is bigger in Lithuania than Aldi, as VivALDI would have been the most seamless pun by which to highlight the commercialism of the season.
The title track wraps it all up nicely, and ventures closer to K’s whiplash blizzard off whirrs and bleeps, although in a relatively restrained form, whereby the discombobulating discord whirs and warps over delicately chiming tones. As things slowly disintegrate – both on the album and in the real world, it feels more like Christmas for the end: this is the soundtrack to the decline. May the end come soon.