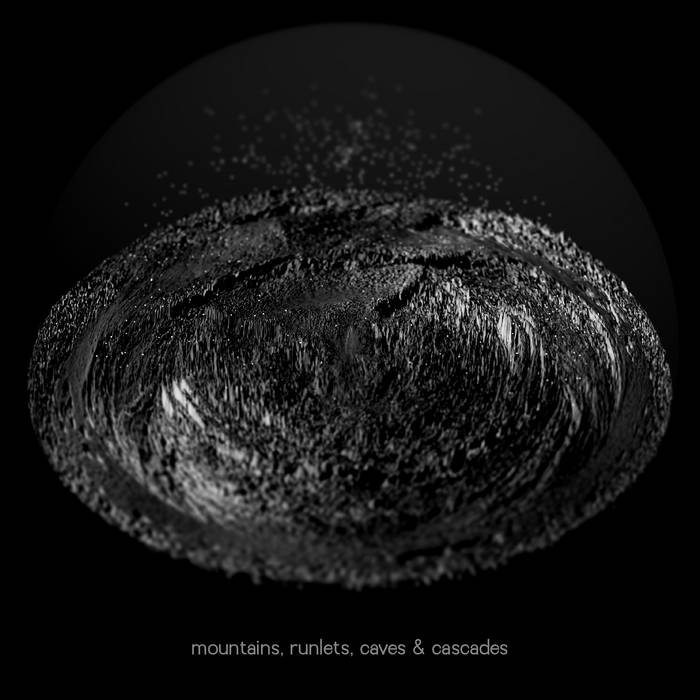 “I could not help feeling that they were evil things—mountains of madness whose farther slopes looked out over some accursed ultimate abyss.”
H. P. Lovecraft, At the Mountains of Madness

The darkness always teemed with unexplained sound - and yet he sometimes shook with fear lest the noises he heard subside and allow him to hear certain other fainter noises which he suspected were lurking behind them.
H. P. Lovecraft, The Dreams in the Witch House

“It was a godless sound; one of those low-keyed, insidious outrages of Nature which are not meant to be. To call it a dull wail, a doom-dragged whine, or a hopeless howl of chorused anguish and stricken flesh without mind would be to miss its most quintessential loathsomeness and soul-sickening overtones.”
H.P. Lovecraft, The Case of Charles Dexter Ward

www.nitestylez.de/2022/09/gintas-k-mountains-runlets-caves.html WEDNESDAY, SEPTEMBER 07, 2022
Gintas K - Mountains, Runlets, Caves & Cascades [Gk Rec 006]
Coming in all the way from Lithuania is Gintas Kraptavicius' - a.k.a. Gintas K - new album "Mountains, Runlets, Caves & Cascades" which has been released as a limited to 100 copies CD edition on the artist run imprint Gk Rec as the labels cat.no. 006. Released on August 13th, 2k22 and originally recorded back in 2k20 the six tracks and roughly 47 minutes spanning longplayer once again sees the Lithuanian experimentalist employ his tested and proven setup of computer, midi keyboard and controller to perform a deep dive into hyperdetailed and partially hypergranular flow composition. With the opening set of tunes subsequently named "Mountains, Runlets, Caves & Cascades #1 - #5" and the additional closing tune "Eastern Bells" Gintas K provides a well minimalist view on spatial, cavernous DarkAmbient atmospheres accompanied by chiming, ever busy and moving, partially glitched out background motifs as well as sweeping filters and the occasional hard hitting, yet heavily reprocessed percussion burst, probably generated from originally field recorded sounds that bring to mind bands like Einstürzende Neubauten in their "Kollaps" phase whereas the rest of the album would rather apply to those deeply entrenched in the sounds of artists like Yves De Mey, Aleph-1, Oval, Shapednoise, Aube and other producers of partially Glitch-leaning Deep Listening Avantgarde Music of electronic origin. Good stuff. Check.
-------------------------------------------------------------

GINTAS K - MOUNTAINS, RUNLETS, CAVES & CASCADES (CD by GK Records)
www.vitalweekly.net/1350.html
The only 'information' here are three quotes from stories by HP Lovecraft, the author of supernatural and horror fiction (and more, of course). Are we to hear the music by Gintas K as a sort of soundtrack to the stories? I know Gintas K (as in Kraptavicius) as a man of laptop music, and this new CD is no different. And yet, reading these quotes (and thinking that I should start on that Lovecraft book I bought years ago!), one is almost obliged to think of Lovecraft, and I am trying to figure out a connection. He says there are no field recordings used in the music here and that all music was played, recorded live, at once, without any overdub using a computer, midi-keyboard and controller. I don't know which software he uses on his laptop, but there is a lot to choose from these days. Max/MSP would be my best guess. I certainly believe in hearing a 'cave-like' sound. Gintas K reshapes his computerized sounds so that they sound like droplets in a cage. Sometimes they sound like bells, like rattling fences or anything one thinks of when thinking about the supernatural and horror. Sounds like slithering snakes, the howl of a monster or a grave opening at night; the unleashing of a beast out of the swamp. What Gintas K does here, and he is doing a great job as such, is to make it all sound not very computer-like. Yet, if you zoom in, you may recognize these to be computer sounds. This play with analogue/digital or real/unreal works very well and fits, for me, the Lovercraftion background of the music. Be I remember that if Gintas K had chosen H.G. Wells, I would probably have heard something about science fiction in this. And, if no such references were made, I would have applauded the abstract nature of computer music. The only downside was that Gintas K could have used a bit more imanigination when titling this pieces. Five parts of the CD's title, plus 'Eastern Bells' is, perhaps, a bit thin. (FdW)
-----------------------------------------------------------

themoderns.blog/2022/08/27/gintas-k-mountains-runlets-caves-cascades/
album „Mountains, runlets, caves & cascades“
August 27, 2022 by Kevin Press
gintas k – Mountains, runlets, caves & cascades
Gintas Kraptavičius says his new album Mountains, runlets, caves & cascades reflects nature in a manner similar to the writing of American horror legend H.P. Lovecraft. “There was a lot of meaning behind Lovecraft’s descriptions of mountains and nature in general,” says the artist, who records under the name gintas k. “His descriptions were seldom shiny.”
Rather than incorporate field recordings, the new work is an entirely digital affair recorded live with no overdubs. “Conceptual explorations,” says gintas. It is a sound artist’s take on nature, as familiar as it is unsettling.
On one level, the album works as an intense electroacoustic/musique concrète experience. With more than 50 solo and collaborative releases on his resume – produced over the last two decades – gintas has earned a place among the world’s great electronic music producers. He is every bit the master over the course of these 47 new minutes.
"Electroacoustic music is like cinema for the ears".-
gintas k
Understanding his intention though, to produce a “sonic picture of nature: forest, mountains, rivers and caves,” adds valuable context. The execution is gorgeous. Among the album’s highlights is the replication of a slowly gathering thunderstorm on the album’s third piece. (At least, that’s how I hear it.)
Like much of his catalogue, the work is deeply visual.
“People tell me that a lot,” he says. “Electroacoustic music is like cinema for the ears. But I don’t think about visuals when I’m recording music.”
That comes later, says gintas. “I am honoured to have been able to work with the visual artists that I have.”
Since 2004, he has collaborated with the visual artist Donatas Juodišius-Juodo. His daughter Indra Kraptavičiūtė designed the new album’s cover.

gintas k – Mountains, runlets, caves & cascades
Posted: 21 August 2022 in Albums
gk. rec. – 13th August 2022
Christopher Nosnibor
auralaggravation.com/2022/08/21/gintas-k-mountains-runlets-caves-cascades/
Since taking control of his own release schedule – in addition to various releases via various labels – Gintas K’s output has shifted from rivulets to cascades, with this nature-themed album being just one among countless releases, live performances, exhibitions. soundtrack and compilation appearances so far this year, and, not least of all, Lėti in May, released on venerable experimental label Crónica.

There’s little explanation behind Mountains, runlets, caves & cascades, beyond a selection of quotes from HP Lovecraft and the detail that the album’s six pieces were ‘played, recorded live, at once without any overdub; using computer, midi keyboard & controller’ in 2020, and one suspects Gintas has a hard drive bursting with such recordings just waiting to be edited and mastered to form unified documents of his tireless output.

The first five pieces form the larger work that sits under the album’s overarching title, numbered one to five. They’re sparse, minimal, echo-heavy, like wandering around in a vast cavern while droplets fall into the subterranean lake that occupies the bottom, and who knows how deep it may be, how many tunnels are filled with millions of gallons of water that have run down through the ground and into this naturally-carved warren of rock-lined corridors beneath the ground.

In places, barely perceptible glimmers of sound, like bat sonar, jangle in the upper reaches of the audio spectrum. I’m reminded of the cat repellent device in my back yard, and I wonder if to some, these passages would actually appear as silence – or if for others, like my ten-year-old daughter, they would find the pitch unbearable and have to run from the room covering their ears. Quiet gurgles and trickles are the primary sounds on ‘Mountains, runlets, caves & cascades #3’ and I find myself feeling altogether calmer, picturing myself in a pine woodland with steep banks. I picture in my mind’s eye local scenery like Aysgarth Falls and Ingleton Falls and find myself at ease – but this being Gintas K, there’s disruption afoot, and blips and squelches zap in seemingly at random to remind us that this is digital art, and the fourteen-minute ‘#4’ marks the full transition into digital froth and sluices of laptop-generated foam.

And so it trickles into ‘#5’ which brings more bleeps and blips and jangling and some high-pitched rattling that for some reason makes me think of seeing footage of milk bottling plants in the 80s – back when milk came in glass bottles, and I trip on this trajectory of nostalgic reverie until the arrival oof the unsettling final track, the eight-minute ‘eastern bells’ that’s a slowed-down yawn of sound, metallic reverberations ringing out into the silence, echoing in the dark emptiness in ebbs and flows, like a conglomeration of sounds, drifting in a breeze.

The silence that preceded the impatient listening and (ardent) discovery of the mountains, runlets, caves & cascades of Gintas Kraptavičius, was obviously necessary - We were aware of it, even of this consciousness of those who know that each step is perhaps the ultimate . A broken silence like a dark curtain that is raised on a strange adventure. Disturbing scent for those who have previously read the quotations, from the man of Providence, which support the release. Abstruse loneliness, anxious sound density, no apparent landmark except our own lucidity (#2) and the not very reassuring echo of it.
Running through these evanescent stone monsters, tortuous mental torrents, salient crevices, is obviously not easy. Triumphing over any autosuggestion, Gintas K hits the mark. Mutant expressionist igniting the spirits, playing with hindsight and dexterity of our cerebral borders, manhandling an imagination immediately put to rout, the Lithuanian maintains, however, a more than reasonable distance with his listener - Mute language. A confusing and yet materially concrete abstraction, the mountains... don't care about the "disorder of the senses" that so many others love to venerate. Here, everything is very solid, carnal, definitively real and the "eastern bells" which close this magnificent work, are there to, very cleverly, testify of it - Remarkable!
thierry massard / 15 août 2022 - 17:45