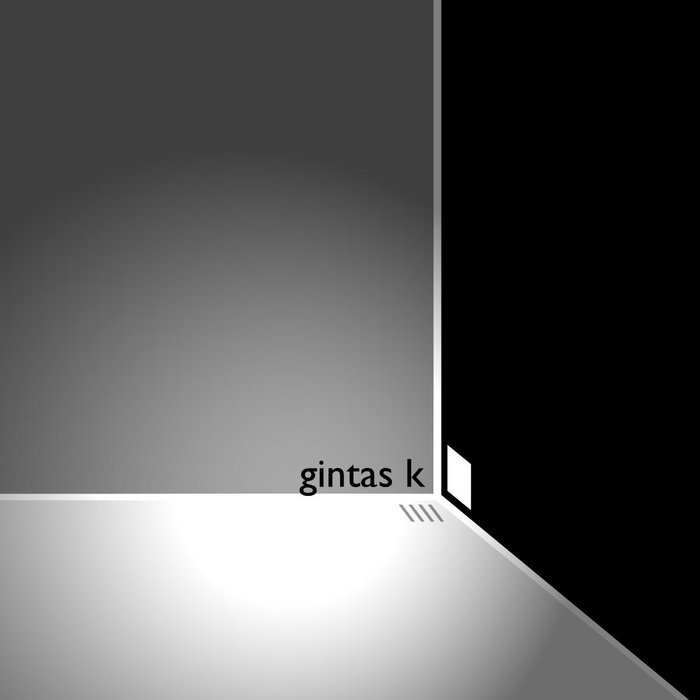 originally released as CDR by Retina Scan (Germany) in 2003.

Texts like these normally start with something like "gintas k, a promising artist from Lithuania" and by doing so mean to contextualise a certain area of the world with a certain style of sound. The usual subtext for Eastern Europe would then be "made by compensating the lack of hyperupfront techno gadgets through a surplus of creativity and avantgarde tradition".
Gintas never felt in a race with the western electronic standard, he never suffered from what he calls "a complex of the former eastern block". However, his music makes a very different approach than most of the electronic new school buddies today, which are aestheticalizing their sound to death, turning their music into designed monochrome sonic tapestries for backgrounding exhibitions. On his already second release, Gintas K is again resisting this kind of tasty reception. (First one appears on Black Orchid records by the way...) Gone through an industrial socialisation, he up to today sticked to the physicality of sound. No abstraction is carrying the content. The sonic experience of his tracks is denying every way of functionalization. His sines and noises never try to represent something else than what they are, and these tones are massive, manifestating their presence on themselves. Move around when you listen to the music. Get in contact. Become sound. But beware: This is not nice, this is ...real. txt from Retina Scan web.


vital weekly 366
Only a few weeks ago, I reviewed a CDR by Gintas K from Lithuania.
This is a new release, this time on a German label. Like on his
previous release, Gintas explores the minimalist beat material, in
the best Pan Sonic fashion. Mostly quite lengthy, just like on the
previous one. A piece like 'Dc Pagal gk' lasts around twenty four
minutes and shifts back and forth with sounds and plug ins. Like I
said about the previous release, I think it would better if Gintas K
would limit himself a bit more and would be more critical as to what
a piece of music should do, rather then keep it running on end. His
work works better in shorter pieces, even when most of the pieces are
still over eight minutes long. 'Alcohol Free' with its Ikeda/Nicolai
influences is the best piece around.(FDW)


Space Junkies Magazine - Anniversary Issue - Vol 1, Issue 12
Gintas K- Mp3 reviews from album "////"
By: Wednesday Elektra
Gintas K, is back with a new album, uniquely labeled "////," from these three tracks "Kurybos," "Alcohol Free" and "1 kHz 48#3 Pure" it sounds as if Gintas K has encapsulated the minimalist soundwave experience into one architectural album.
With a steady heart beat sound thumping rhythmically in the background of "Kurybos," the sound waves tumble in and out of audible ranges in a layered foreground. Don't let the first 9 minutes of this track fool you though, near the end a rumbling begins, growing louder and louder with each passing minute, the music becomes more violent and distinguished. In ways, "Kurybos" is like a heart beat, it starts off soft with moderately slow beats, then grows fast like an adrenaline rush as it moves in and out of dynamic peaks and valleys of beats until the end when the rush becomes so great that it just fizzels out.
"Alcohol Free," starts off sounding like the buzy signal on your telephone, a steady pulse that occassional changes its speed and repetitive pattern to create a steady flow of sound. The signals fade out and change direction, becoming faster and louder with a more "echo" like sound attached to it. It has a more "buzzing" feel that becomes more progressive as the song lingers on. Near the end of the track, where it always seems to get more interesting and dynamic, a new indescribably noise appears. Its almost like a talking machine that's been placed underwater and is slowly malfunctioning.
"1 kHz 48#3 Pure," this track will more then likely set off a chain reaction of dog howls and barks in your neighborhood, with its piercing and shrill high pitched whistles mixed with keyboard/pipe organ like tones. Its one of the shortest Gintas K, tracks I've come across, and probably for good reason! Its definitely harsh on the ears at loud volumes (almost reminiscent of Flatline Construct's works). It does have a nice catchy rhythm to it though. These were a nice set of layered tracks that were well enjoyed. Hopefully, more Gintas K tracks are in the works!