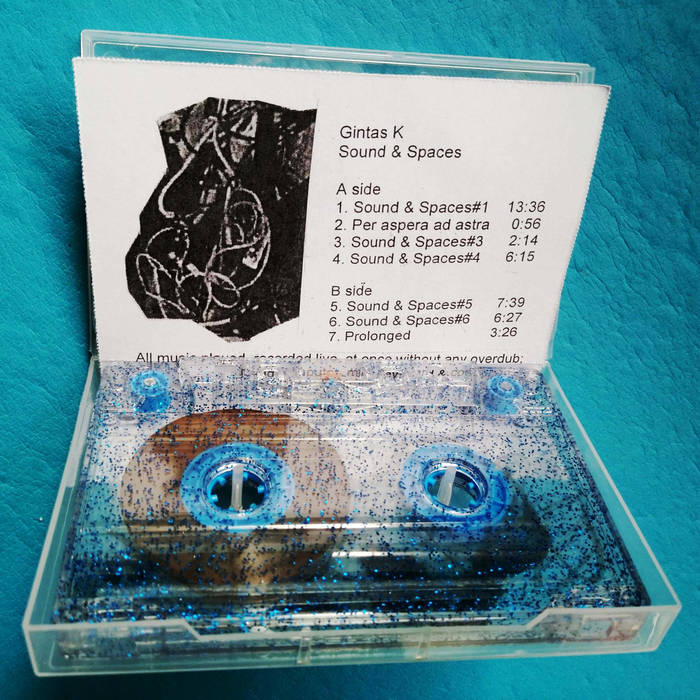 auralaggravation.com/2020/10/18/gintas-k-sound-spaces/
Gintas K – Sound & Spaces
Posted: 18 October 2020 in Albums
Tags: Album Review, analogue, electronic, Experimental, Gintas K, Microtonal, Random, Sound & Spaces
Powdered Hearts – 15th October 2020
Christopher Nosnibor
Gintas K releases albums more often than I change my clothes. That’s of course intended as a comment on the prolific nature of his output, rather than a confession about my personal hygiene post-lockdown, although not going into the office or being around people – or ever within two metres of them – has meant I’ve maybe made slightly less effort of late.
The same clearly can’t be said of Gintas K, at least in terms of his work, since I don’t know if he’s been tweaking away at his circuitry in his pyjamas or the same jeans for a week and a half or if he’s been bothering to shave or deodorise daily. I don’t need to, either, of course.
Anyway: Sound & Spaces explores what’s become established as familiar territory for Gintas K, with gloops and bibbles, froth and foam, squelchy bubbles of sound rising up randomly against the crackling burrs of electronic distortion. Sound & Spaces is less attacking and less abrasive than some previous outings, and is les intense and intensive in its interrogation of microcosmic space than some of his previous microscopic, microtonal explorations.
The first track – the thirteen-minute ‘Sounds & Spaces #1’ is a challenging mess of stammers and jolts, fizzing and crackling in a swampy slosh of analogue synth soup. It very much sets the tone, but in context, it’s a comparatively gentle start to what ultimately unravels to be quite a brain-shredder of a set.
‘Per aspera ad astra’ is a brief interlude of tingling, jangling dissonance before ‘Sounds & Spaces #3’ brings a bit of low-end grumbling, whining, and distortion, yawning undulations whizzing and popping all over.
By ‘Sounds & Spaces #4’, it’s almost impossible to differentiate distortion from percussion, and what originates where, although there are distinctly snare-like cracks in the feverish melting-pot of contrasting textures and tones, which become increasingly fragmented, fractured, and overloading as the album progresses. As an album it’s a frothy foment, and while some may find it simply uninteresting or a wash of so much noise they can ignore, I’m unlikely to be alone in finding the experience quite tense and uncomfortable – and nothing more so than the twenty seconds of silence at the end of the overwhelming chaos of ‘Sounds & Spaces #5’
If disorder offends your sensibilities, avoid this recording: once again, Gintas K has captured metal turbulence in aural form. It’s hard to process, but well worth enduring the turmoil for.