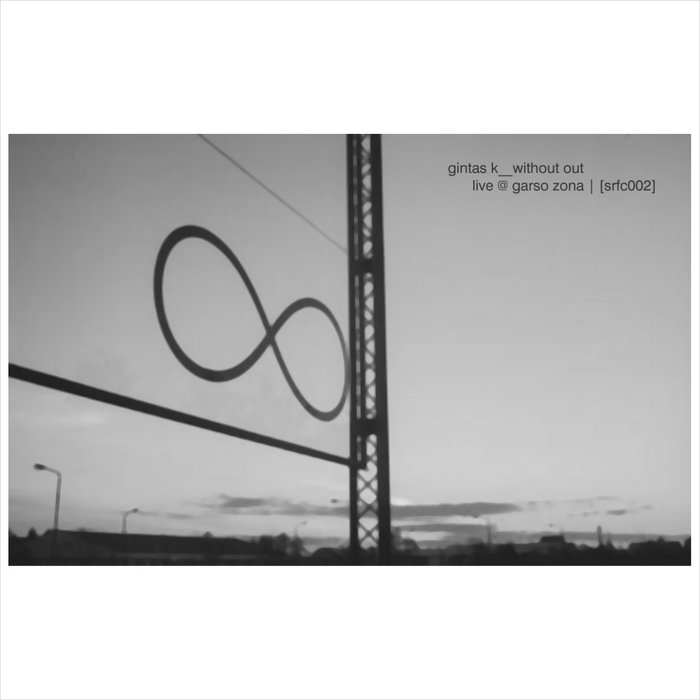 originally released by Surfaces netlabel (Lithuania) in 2003.
www.discogs.com/label/Surfaces+Netlabel
GINTAS K - WITHOUT OUT [LIVE]
gintas k's music can be described as microsound or noise, but his purpose is not to create within the frames of these styles. his primary interest is studying the physical effects of sound on the human psyche. in result, gintas k utilizes sine waves, expressive synthesized tones, noizes and complex rhythmical structures. surprisingly, the result is not mechanistic - rather, it is quite organic and flowing
in addition, gintas k is (and has been) involved in numerous conceptual art actions that are dedicated to experimental sound and its interaction with the human body/consciousness
the composition that has been selected for the label's second release is a 31-minute-long live piece that was recorded for the garso zona experimental sound festival organized in 2003 in kaunas, lithuania. although the sound is certainly challenging, it is well worth the effort of trying to dissolve in it. as in many compositions by gintas k, the sound is very diverse, ranging from barely audible frequencies to intense and emotional noised sweeps, all supported by intricate glitch textures. when listened to on proper equipment, the changes in sound almost seem to produce changes in the listening space as well
this release is recommended to listeners who enjoy complex sound structures and non-conventional arrangement
txt from archive.org/details/srfc002

VITAL WEEKLY#398
GINTAS K - WITHOUT OUT (MP3 by [Surfaces])
The second available release from Surface is a thirty-one minute piece by Gintas K, whose work was reviewed before. His piece was recorded at the Garso Zona festival. It starts out with what seems to be sound of skipping
vinyl, but then is guarded by majestic sweeps of oscillating noises which built up intensely. Everything comes to a full stop half way through and Gintas K moves into more ambient areas, but effectively distorts the deep ambient sound by cranking the volume up. It must have been quite an intense concert that evening. (FdW)

Space Junkies Magazine - Vol #2, Issue #9
GINTAS K. - Without OUT [Live]
By: Wednesday Elektra
GINTAS K is a Lithuanian soundscape artist that has breached my aural senses once again with his droning and pulsating sound waves of minimalist music in
this live performance CD. This is by far one of my favorite GINTAS K releases, his last album was a bit too soft and monotonous for my liking, I guess you could say it was a bit "fluffy," but this new release has more power, more persistence, more intensity, more drudging beats and lots of synaptic energy. It wouldn't be a worthy GINTAS K release without the flip-flop of tempos, rhythms and soundwaves and "Without" definitely has it all. Hopefully GINTAS K will continue to release more superb atmospheric
soundwave music in the future, especially if they're of this quality of dynamics and beautiful drones. It was a much enjoyed live album release!
Rating: 10/10

all music created by Gintas K