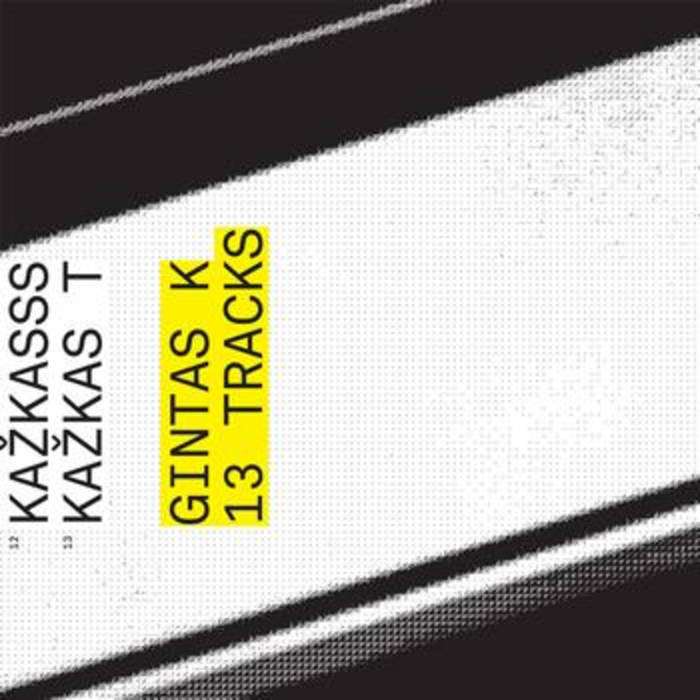 13 Tracks by Gintas K is an exploration within the rich scale of sub-genres in the context of post-digital electronics. Intensity of powerful rhythmic carousels and intertwined sonic textures of precisely processed electronic tonalities, sharp sonority of melodic themes, glitchy ambiences, post-minimalist strictness and transparency – all are melted into complex and dynamic musical paths. 13 Tracks is another one step forward in search for musical excellence, pure and powerful experiences of sound in an original manner of Gintas K.
text by audio_z


JULY 3RD, 2007
GINTAS K
13 TRACKS
Gintas K's 13 Tracks is a example of the beauty that can be manufactured from sonic detritus and sounds usually labeled and cast away as ordinary: clicks, crackles, sine wave drones, and subtly strafed textures collide into a musical discourse on the aesthetics of post-techno. The ghosts of genre creep in from time to time; a gentle Eno-like ambiance populates the first half of "Ka as zinau", only to be subsumed by a cold, marching, minimalist rhythm halfway through. Bits of the rhythmic energy of jungle and even a few heavily abstracted guitars make an appearance as the album progresses. Gintas K shows remarkable ability for finding character in the simplest of sounds and building into them complex, shifting, magnificent structures. txt from Percepts web.


Gintas K 13 Tracks PERCEPTS CD
THE WIRE #289 MARCH 2008
Gintas Krapatvicius has been a fixture on the Lithuanian experimental music scene since 1994. Today, using synthesized tones, sinewaves, echoes, reverbs and noises, his aim is to "study the physical effects of sounds on the human psyche". On 13 Tracks, he makes these investigations in the most discreet manner: the human psyche has to cock its ear sharply in order to take in tracks like "Ritmas", which could be taken for the amplified operations of a microchip, or "Kruva Tempu", which makes "Ritmas" sound like a symphony for factory horns -the veritable footprints of angels dancing on the head of a pin. All the same, these tiny interiorities are elaborate and curious enough to be worth attending to.
Electronica Reviewed by David Stubbs


GINTAS K - 13 TRACKS (CD by Percepts)
VITAL WEEKLY 592
After some MP3 and CDR releases, this is the second release on a CD by Lithuanian Gintas K, a work he produced for the Transmediale 2007 exhibition. I am not sure if the pieces are linked together or that they should be seen as standing by themselves. Gintas K is a man behind the laptop screen, where the blocks of sound are neatly organized. Rhythmical music but not to dance to. Head nod music. Your head moves along the rhythm, but not your entire sweaty body on the floor. Some of the more austere pieces around here, remind me of the older Alva Noto such as in 'Ka As Zinau', but in general Gintas K is less organized and less conceptual than the master himself. Which is actually nice, since the thirteen tracks are a pretty varied bunch of music. Always based on rhythm, but at times with a bit more synthesizer/sine wave sounds, different kinds of sounds making the rhythm, this is not always a surprising new look on what was once called clicks 'n cuts, but which stands fully in that tradition, but nice produced with a certain fresh look with some more anarchistic approach. (FdW)

GINTAS K - 13 TRACKS (WWW.PERCEPTS.INFO)
Raves.com 2008-06
From tinkered-with noise to abrasive sound to minimalist ambient, the musical arc tread by this batch of tracks represents a whole, regardless of the different places one has to go to complete the journey. Some tracks are challenging (read: difficult to listen to) while others are mindsweeps of transcendent ambient and experimentation. The set of tracks as a whole makes experimental diversity into a project that somehow seems like everything fits. It's less harsh than some fringe audio work but not as accessible as others. I wouldn't start an experimental newbie off with this but someone who's had a chance to dry off behind the ears might take this as a gateway to the next level of out-there music.
-- review by Kristofer Upjohn


13 Tracks - Gintas K
Furthernoise January 2008
I first became aware of Gintas K when when we both contributed remixes to Jody Roses' Singing Bridges album a few years ago and being impressed with his contribution, I have kept up his exploits ever since. Subsequent investigations have also revealed that he was an early contributor to Furthernoise and the grapevine of micro / experimental lists, so I felt compelled to put his new album 13 Tracks on my player the moment it came through the door
If the first track Nezinau Kas Tai was anything to go by, this was going to be one hell of a relentless assault on the senses and by the time it had finished, I wondered how much room he had left for any further dynamic trajectory. Not that I didn't enjoy this first foray into hypnotic noisy oblivion but once into (tracks 2 & 3) Ritmas 100 Fonas and Kruva Tempu, what emerges is a gentle journey through minimal sines, glitches and feedback, in an album that is wistful & playfully contemplative. There are definite resonances of his Bridges remix here i.e. manipulating a sounds inherent rhythm or tone as a starting block, only here he creates layers minimal compositions without them sounding forced or too academic. His audio palette is a mixture of electronic and found sounds, meshed in seamless collages that are at times quite cinematic. Think man running through industrial plots, pursued by unknown agents resting to catch his breath only to be transported to futurist landscapes of frogs conversing in Morse code. He also likes his sub bass, which balances the high end of some of the more glitchy tracks and compliments great production and inventive stereo panning. Ka As Zinau has to be my pick and features a general mix of all of the above with building crescendos of feedback, and at a mesmeric length of 12 minutes 50 you are really floating on air by the end of it. I also really like his recurring signature of crackly hypnotic rhythms and discerning use of sound, which is what gives his work a unique appeal.
Review by Roger Mills


Gintas K "13 Tracks"
Brainwashed 06 January 2008
Lithuanian conceptual artist and performer Gintas Kraptavicius manipulates minimal digital sources and acoustic vibrations in the service of narrative rhythms and electro-acoustic wand waving. Rather than merely barricading himself behind walls of atmospherics, Kraptavicius uses his tools to explore sound in ways that are both unpredictable and inviting.
This is not to say that there aren't austere or abrasive moments on 13 Tracks. In fact, the album has plenty of them. Yet Kraptavicius' methodology disarms rather than alienates, favoring surprise over antagonism. "Nezinau Kas Tai" kicks off to an alarming start with an eruption of pummeling beats and raising pitches. The only thing keeping the tension at bay are the soft melodic drones shimmering in the background. The insistence eventually fades, replaced by what sounds like crinkling foil and bursts of air. The track ends shortly afterwards, mysteriously but unsentimentally vanishing mid-measure. Tricks like these are constant but without foreshadow, which is what makes them so effective.
Each song contributes something different without repeating any ideas from its predecessors. The music achieves a pleasant balance between rhythm and abstraction that revitalizes the ear and maintains interest the whole time. Even the song lengths differ drastically, ranging anywhere from the minute and a half of "Ritmas 100 Fonas" to the almost thirteen minutes of "Ka As Zinau." The latter starts with the patient beeps and bleeps of what could be medical equipment or other scientific measurement devices, supplemented by intermittent tests of an emergency broadcast system. While a bit sterile, it works as an effective palette cleanser before hollow beats and bursts of air wrestle over fields of mechanical crickets only to evolve into a pulse-driven razor wire crusade. The change is drastic but not incongruous.
Not every track is equally entertaining, but nothing wears out its welcome either. 13 Tracks isn't necessarily groundbreaking, but it has more than enough strange noises and turns regardless to make it a fun, worthwhile experience from beginning to end.
Written by Matthew Amundsen

Gintas K - 13 Tracks (CD, Percepts, Noise/experimental)
babysue® November 2007
Given the fact that his full Lithuanian name (Gintas Kraptavicius) would be difficult for most Americans to remember and/or pronounce, Gintas K has probably made a wise marketing move by making the decision to shorten his name. 13 Tracks is weird...really, really weird. And it is also bound to alienate 99% of those who hear it. Gintas records from the "noise is music" school of thought. He has been involved in the undercurrents of the music scene since the mid-1990s. This lengthy album (over 70 minutes) features strange, cold, electronic instrumentals that don't involve traditional instruments and/or song structures. Gintas takes sounds and manipulates them into music. The results...are stark and peculiar. Many of these pieces spin like the soundtrack to a really weird science fiction film. Quite difficult to describe indeed. While we certainly can't recommend this to everyone...folks into the more peculiar sounds of the universe will be enchanted with oddball compositions like "Nezinau," "Ritmas," "12-03," "WWW," and "Maiden." While some folks may hate this kind of stuff...we absolutely love it...

Gintas K- 13 Tracks
Smother Magazine
Post-minimal techno that drives one to the rhythm of hard jungle, sine waves, and drones. This is music for all kinds that have left the realm of your standard fare electronica for something far leftfield and different. “13 Tracks” is just that, thirteen tunes that are tuneless, magnificent, and creepy. All in a post-Brian Eno sort of world. Weird experimental crunches that have few lapses in quality post-techno whirls.
by - J-Sin


Gintas K 13 Tracks
25-10- 2007 ReGen Magazine
Minimalist electronic noise from a pioneer of the Lithuanian industrial scene.Gintas Krapatvicius is perhaps best known for his role in Modus, Lithuania's first industrial band, but for the past several years he's been working in a more minimalist electronic palette, composing soundscapes from glitches and buzzing. His latest album, the unimaginatively titled 13 Tracks, plays with expectations from the beginning; "Nežinau Kas Tai" begins with a distorted drum loop that builds into a crescendo of feedback, but just when you expect the bass to drop into a power noise onslaught, the piece retracts into glitch-laced ambience. Ranging in length from under two minutes (the eerily modulating "Ritmas 100 Fonas") to near epic-length explorations (the 12-minute "Ka Aš Žinau," which builds from insect clicks into grating industrial squeal and clattering rhythm), Krapatvicius makes a conscious choice to avoid almost any resemblance to conventional music. Though it never approaches the violence of extreme noise or power electronics, Krapatvicius' work is nonetheless characterized by a certain abrasiveness. "12-03" is particularly torturous in its own unassuming way, with quiet tones reminiscent of childhood hearing tests repeated at just a high enough frequency to be intensely painful. While this sonic passive-aggressiveness makes for a difficult listen, it does render the occasional hints of melody all the more effective. When tambourines and hints of a muffled piano line emerge from the subsonic bass of "EEE2," it comes as a complete shock. "Maiden" offers similar surprises; though it starts with a soft humming frequencies employed throughout 13 Tracks, added buzzing layers eventually form harmonies in the conventional sense, their natural accord creating a subtle sense of pleasantness that's amplified by the all the dissonant minimalism surrounding it. While Krapatvicius' sonic experimentation isn't for everyone, fans of similar European minimalists like Coh's Ivan Pavlov will appreciate, if not necessarily enjoy, his contributions to experimental music. By: Matthew Johnson

all music created by Gintas K