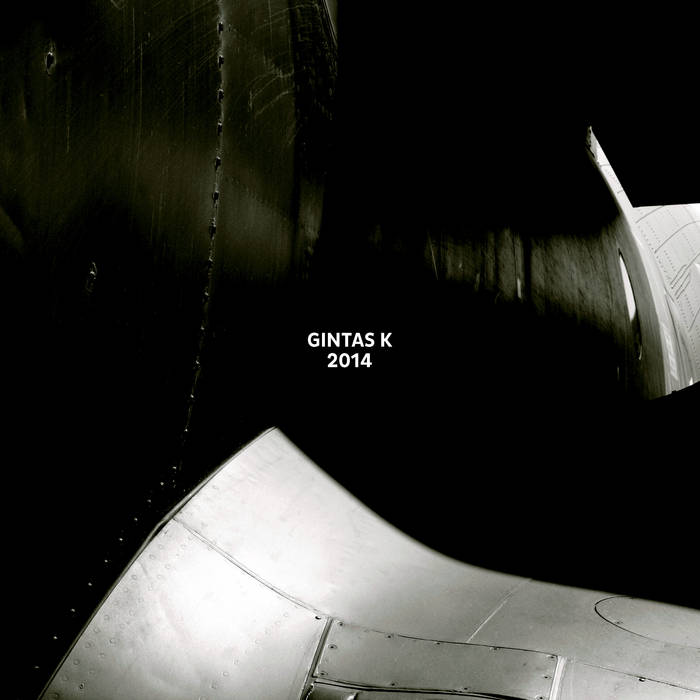 Gintas K will shower the ears with a whole lot of incredible data streams, all clustering electronica bits and bytes that drop down in a wild way. As if data communications had been flushed through the shower head, tumble down and ending up together in the drain. Strangely when the tap is closed and these electrodes have calmed down in their dripping ways, they actually form beautiful sounding music… well, music might not be the word for all to say, but it does feel like there is a lot of beauty to be discovered in these busy data dada streams.

In a way it’s a bit like experiencing an electrified case of data loss; material that sounds very bright and yet as if it had been decoded to be as small as possible, probably to act as if they had been liquid drops instead of massive loads of secretive compact information. As if it wanted to say “please don’t pay attention to us, we are innocent ‘nothings’ while secretly being a encoded code for the meaning of life, nuclear launch codes or something else that might be of someone important their special interests.

…I don’t know about you, but in this case I’m happy not to be of such importance, making me happy with how these data expressions sound-like just the way they come and ‘are’. Screw their messages or whatever they mean or try to hide or express; to me its music. Well, music might again not be the word for all to say, but I wouldn’t call it noise either; it’s simply too intelligent and there are real structures over here; like compositions that had been planned out with efficient efficiency. I must say that I would love to save water and instead take a shower under this data stream… I don’t think to even dry myself up with a towel; just leave the electricity out to dry on the skin; how nice it would be!

It seems as if this release is designed to cause maximum confusion. It’s called 2014 and is being released here in 2017. It was ‘originally’ released by German label Attenuation Circuit on 8th August 2017, and has been – so far as I can make out – independently released by the artist himself, with the subtitle of Attenuation Circuit 2017. Given the album’s contents, it sort of works.

The accompanying blurb – which is in fact culled from a review published on August 12th (is this chronology messing with your orientation yet?) is a curious mix of hyperbole, unusual metaphors and theoretical reference points:

‘Gintas K will shower the ears with a whole lot of incredible data streams, all clustering electronica bits and bytes that drop down in a wild way. As if data communications had been flushed through the shower head, tumble down and ending up together in the drain. Strangely when the tap is closed and these electrodes have calmed down in their dripping ways, they actually form beautiful sounding music… well, music might not be the word for all to say, but it does feel like there is a lot of beauty to be discovered in these busy data dada streams.’

As much as the quirkily playful application of abstract digitalism does clearly it comfortably within the framework of Dadaism, it’s also a work which readily aligns itself to the postmodern, in the way that it effectively recreates the experience of information overload, and does so in a fashion which is both nostalgic and retro (the sparking circuits are more dial-up than fibre optic) and executed with a certain hint of parodic pastiche. At the pace of progress as it stands, even 2014 feels like a point of nostalgia on the cultural timeline: a year which predates the vote for Brexit and the accession to power of Donald Trump, it may be a year with little going for it and which has little to mark it as memorable, but many would likely concur that 2014 stands in a period which is better than the present.

2014 is certainly one of Gintas K’s noisier and more challenging releases. While Slow was a subtle and quite quiet, delicate work, 2014 is far more up-front and attacking in every respect. It’s also more difficult to position, in that it absolutely does not conform to simple genre categories like ‘ambient’, instead straddling vague brackets like ‘electionica’, ‘industrial’, and ‘experimental’.

Hurtling from the speakers from the get go streams a barrage of gloopy digital extranea, a glissando of chiming binaries and a dizzying digital wash that flickers and flies in all directions, an aural Brownian motion of beeps and bleeps.

The eight-minute ‘max’ starts very much as ‘min’, with a full three minute’s silence, before a brief crashing facsimile of some metallic kind of percussion makes a fleeting appearance. There are sporadic clunks and scrapes and minute glimmers of higher-end frequencies, but for the most part, the silence of space dominates the clutter of sound.

‘5 zemu ir max2’ sounds like R2D2 having a seizure, with occasional blasts of distortion and random thuds punctuating the frenzied stream of bleeps. It’s ten minutes long. And I have no idea what the title – or indeed any of the titles attached to the individual pieces – stands a s reference to, just as the overarching 2014 has no obvious connection to the seven tracks it contains.

Crackled a gloops and bloops and whiplash blasts of static, crashes like cars impacting at speed and jangling rings all congeal into a digital mush which bewilders and disrupts the temporal flow. 2014 is disorientating, and not just in the immediate moment, but in terms of a wider placement and sense of time / space.